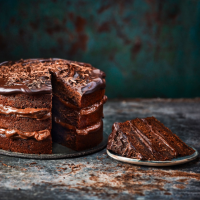 Sandwich together soft chocolate sponges with ganache buttercream and top with glossy icing to create a tall, dark and handsome showstopper.

1 Preheat the oven to 190˚C, gas mark 5. Grease and line 3 x 18cm sandwich tins; set aside. Put 150g chocolate in a heatproof bowl over a pan of barely simmering water, ensuring the bowl is not touching the water. Allow to melt, stirring occasionally, then take off the heat and set aside.

2 Sift the flour, cocoa powder and a pinch of fine sea salt into a medium bowl. In a jug, lightly beat the eggs. Set both aside. Use electric beaters or a freestanding mixer to beat the butter and sugar for about 8 minutes until very pale and fluffy, scraping down the bowl every now and then. Continue mixing on a high speed while gradually adding the eggs, then stop beating and carefully fold in the flour mixture with a rubber spatula. Fold in the melted chocolate, soured cream and milk.

3 Divide evenly between the prepared cake tins. Use a rubber spatula to spread the mixture evenly, with a slight dip in the centre of each. Bake for about 35 minutes, making sure the tins are not touching; swap the cakes around after 20 minutes (not before), to ensure they cook evenly. To test that the cakes are ready, rather than using a skewer, press each one lightly with your finger – they should be firm and springy to the touch, and coming away from the side of the tin. Cool in the tins for 2 minutes, then carefully run a palette knife around the edge of each sponge; turn out onto a wire rack. Peel away the parchment and leave to cool completely.

4 Meanwhile, for the ganache buttercream, put the chopped chocolate in a bowl. In a small pan, heat the cream gently until steaming and starting to bubble at the edges; remove from the heat and pour over the chocolate. Allow to stand for 1 minute then stir until just combined (don’t overmix as it could become grainy); set aside to cool for 5 minutes. In another bowl, beat the butter and icing sugar until light and fluffy, then stir in the cooled chocolate mixture. Chill for 30 minutes until firm but spreadable.

5 To assemble the cake, put one sponge on a serving plate or cake stand. Use a palette knife to spread ½ the buttercream over it. Top with another sponge, spread over the remaining buttercream and finish with the final sponge. Chill for 30 minutes until firm.

6 For the icing, chop 90g chocolate and melt it with the golden syrup in a bowl over a pan of simmering water. Remove from the heat and sift over the icing sugar; stir it in, along with 2-3 tbsp hot water, until just combined. While still warm, pour the icing onto the top of the cake and use a palette knife to spread evenly. Use a peeler to create chocolate shavings with the remaining chocolate and scatter over the cake. Keep for up to 4 days in an airtight container.