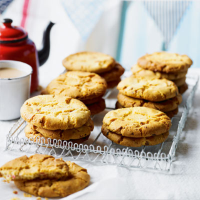 1. Preheat the oven to 180ºC, gas mark 4. Line 2-3 baking trays with baking parchment. In a large bowl, cream together the butter and sugar until light and fluffy. Stir in the condensed milk, followed by the sifted flour.

2. Mix in the chocolate chunks and the freeze dried strawberries.

3. Divide the dough into 28 walnut sized balls, place on the prepared baking trays and flatten slightly with the back of a spoon, allowing plenty of space for spreading.

4. Bake in a preheated oven for 16-18 minutes until golden and risen, but a little soft in the middle. Leave to cool slightly on the trays before cooling on a rack, then serve.