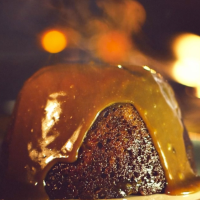 1. Grease a 1 litre pudding bowl. To make the toffee sauce, place the cream, 50g sugar and the treacle in a pan. Cook slowly over a gentle heat, stirring occasionally, until the sugar has dissolved. Bring to the boil for 2 minutes.

2. Place the dates and 300ml cold water in a saucepan and bring to the boil. Remove from the heat and stir in the bicarbonate of soda, which will make the mixture fizz for a few moments.

3. Cream together the butter and remaining sugar, until light and fluffy, and gradually beat in the eggs. Fold in the flour, then stir in the date mixture. Tip half of the toffee sauce into the bottom of the pudding basin then pour in the pudding mixture.

4. Cover with a double layer of buttered foil and baking paper, making a pleat in the centre to allow the pudding to rise. Tie the foil securely with string, then place in the slow cooker and pour in enough boiling water to come half way up the sides of the slow cooker.

5. Put the lid on then cook for 4 hours on high or 8 hours on low. Allow to stand for 2 minutes then turn the pudding out onto a plate.