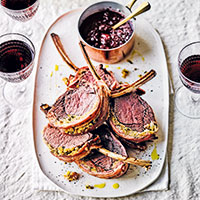 1. Preheat the oven to 140ºC, gas mark 1. In a large frying pan, heat 2 tbsp oil and brown the venison all over, except for the two round ends, until a rich brown colour. Set aside.

2. Return the pan to the heat. Melt the butter and add the onion and garlic. Cook over a low heat for about 5-6 minutes, until transparent. Meanwhile, chop the herbs in a blender. Mix them with the breadcrumbs, mustard, remaining oil and the onion mixture in a bowl. Season with black pepper.

3. Stretch a large piece of parchment out on a clean kitchen surface and lay out the bacon in the middle, stretching it with your hands. The bacon needs to be long enough to cover the venison and hold the stuffing in place. Repeat with the second packet end-to-end so you have a long layer of bacon. Place the venison on top of the bacon and carefully pack the stuffing around the meat. Next use the bacon to wrap tightly around it. Tie it together with cooks’ string, or two long metal skewers – weaving them first through the bacon then the meat a couple of times until they come out on the other side. Using the parchment, carefully place the bacon-wrapped venison into a large roasting tin, then discard the paper. Roast for 1 hour for rare, or 1 hour 15 minutes for medium rare.

4. Meanwhile, make the compote by putting all the ingredients into a medium saucepan. Bring to the boil and simmer for 20 minutes until thickened and glossy, stirring occasionally to prevent it from catching.

5. When the venison is cooked to your liking, increase the oven temperature to 200ºC, gas mark 6 and cook for a further 10 minutes, until the bacon has crisped up and coloured. Leave to rest for 5 minutes before carving. Serve with the hot compote, mashed potatoes and wilted, buttered spinach or green beans.