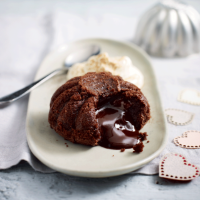 Rich, dark and handsome, this pudding’s soft sponge and velvety smooth centre make it the perfect end to a romantic meal for chocolate lovers everywhere.

1. Preheat the oven to 200ºC, gas mark 6, and put a baking tray in the oven. Generously butter the insides of two 200ml pudding moulds. Make up the coffee with 2 tbsp boiling water and leave to cool.

2. Put the butter and chocolate in a heatproof bowl and set it over a pan of gently simmering water. Stir occasionally, until melted, then remove from the heat and allow to cool.

3. Put the whole egg with the egg yolk and sugar in a bowl, and whisk together until just combined. Whisk in the flour. Mix the coffee into the melted chocolate and butter, and fold into the egg mixture. Pour into the moulds, put them on the hot baking sheet and bake for 18 minutes until the puddings are well risen and coming away from the sides. Leave for 1 minute then run a round-bladed knife around the edge and turn them out onto plates. Serve with half fat crème fraîche.

Cook’s tipPrepare these up to a day ahead before you want to cook them. Make the mixture, fill the moulds, then cover with clingfilm and chill. Cook them for 20 minutes if you’re baking straight from the fridge.

Including 30g half fat crème fraîche