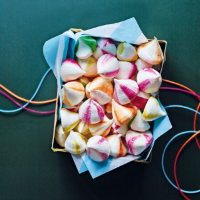 1. Preheat the oven to 200°C, gas mark 6 and line two large baking trays with baking parchment. Pour the sugar onto the tray and spread it out into an even layer. Place into the oven for 5-6 minutes, or until the sugar feels hot to the touch and its outer edges are just starting to melt.

2. Meanwhile, place the egg whites into a large bowl or the bowl of a stand mixer. Use an electric hand whisk or the whisk attachment on a stand mixer to whisk the whites until stiff peaks form.

3. Carefully and gradually whisk the hot sugar into the egg whites, adding a spoonful at a time and letting each fully mix in before adding the next. Avoid using any of the melted sugar from around the edges – this will not dissolve properly in the meringue mixture.

4. When all the sugar has been added, turn the mixer speed up and whisk for 8-10 minutes, or until the mixture is really thick and glossy. Rub a small amount between your fingers – you shouldn’t be able to
feel any grains of sugar. If it still feels gritty, continue to whisk for a few more minutes until smooth. Whisk in the clementine zest.

5. Use small dots of meringue mixture to secure the baking parchment to the baking trays. Turn the oven down to 90°C, gas mark ¼.

6. You’ll need at least 1 piping bag for each of your colours. Open up each piping bag and fold over the top. Paint or squeeze the food colouring in 3 lines inside each bag, then divide the meringue mixture between them. Snip off the ends to give 2-3cm openings, then pipe kisses about 3cm in diameter onto both trays. Repeat until all the mixture is used, making about 50 kisses.

7. Bake for 1 hour 30 minutes, swapping the trays over halfway through until the kisses feel dry to the touch – if you pick one up, the base should be firm when pressed. Allow to cool completely before packaging into small bags or boxes. The meringues will keep for up to 1 week in a dry environment.