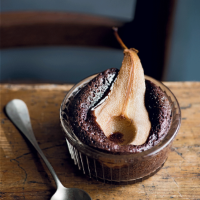 2. Mix the cassis, caster sugar and cinnamon stick together in a saucepan. Lower in the pear halves and add enough boiling water to just cover them. Bring to the boil and simmer for 5 minutes until softened. Remove the pears from the cooking liquid and allow to cool. Leave the poaching liquid on a low heat to reduce.

3. For the pudding, put the butter in a large pan and place over a low heat until just melted. Remove from the heat and stir in the sugar until well combined. Beat the eggs together in a jug. Gradually add the eggs to the butter and sugar, beating well in between each addition.

4. Sift the flour and cocoa powder on top of the egg mixture, then beat with a wooden spoon until nicely combined. Thinly slice the poached pears. Pour the cocoa mixture into the prepared ramekins, then arrange the pears in the batter.

5. Bake in the centre of the oven for 20 minutes. The mixture should be risen around the pear, but still slightly gooey at the bottom.

6. To make the sauce, reduce the poaching liquid until only 100ml remains. Put the chopped chocolate into a bowl and slowly pour in the hot poaching liquid. Add the liquid gradually, stirring all the time until the chocolate has melted and the sauce is smooth. Serve immediately.