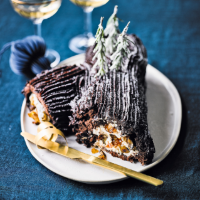 To decorate
Icing sugar and sprigs of washed rosemary

1. Preheat the oven to 180ºC, gas mark 4. Line the base of a 35x25cm Swiss roll tin with baking parchment, making sure to snip into the corners so the paper lies flat inside. Brush with a little vegetable oil. Use electric beaters to whisk the eggs with the sugar and salt until it quadruples in size and the mixture leaves a ribbon trail when the beaters are lifted out.

2. Transfer a third of the egg mixture into a mixing bowl and roughly beat in the flour, cocoa powder and baking powder. Once totally incorporated, carefully fold in the remaining egg mixture until just combined. Tip the mixture into the prepared tin and cook for 15 minutes.

3. Meanwhile, heat a large nonstick frying pan and add the chestnuts. Toast until golden all over, then add the sugar and turn the heat right down until the sugar has melted. Coat the chestnuts with the melted sugar until they’re glistening, then tip onto a large tray lined with baking parchment. Chill until cool and crunchy.

5. To make the filling, whip the double cream with all the other ingredients until the mixture is stiff. Remove the roulade from the fridge, unroll, and generously spread with the filling. Scatter over the caramelised chestnuts and carefully roll back into a sausage shape. Cut the end of the log diagonally and either reserve it for your ‘gift log’ (see tip, right), or stick it to the side of the main roulade, to make a Y-shaped log. Place back in the fridge while you make the buttercream icing.

6. Beat the butter and gradually add the icing sugar until fluffy and doubled in size. Next, alternate beating in the cocoa and rum (or water) a little at a time until incorporated. Transfer to a piping bag with a large star nozzle. (If you don’t have a star nozzle, you can use
a round one and finish by dragging a fork carefully across the surface to mimic the bark of a tree.)

7. Pipe the buttercream, starting with a concentric circle at one end of the log. Next pipe big, long lines along the main part of the log until it’s completely covered. Repeat with the smaller section of the log. You can decorate it with rosemary twigs, upended to make ‘Christmas trees’. These look great with a little icing sugar sieved over the top. You can also decorate them with sprinkles – use a brush and a little icing sugar and water to glue them on. Keep the Bûche in the fridge for up to 24 hours – just take it out 30 minutes before serving.

Cook's tip
In step 5 rather than making one large traditionally shaped Bûche with a branch to serve 8, you can make two Bûches instead – one to serve 6 and a smaller one to serve 2, to give to a neighbour or friend. Decorate as in step 7 before packing into a box.